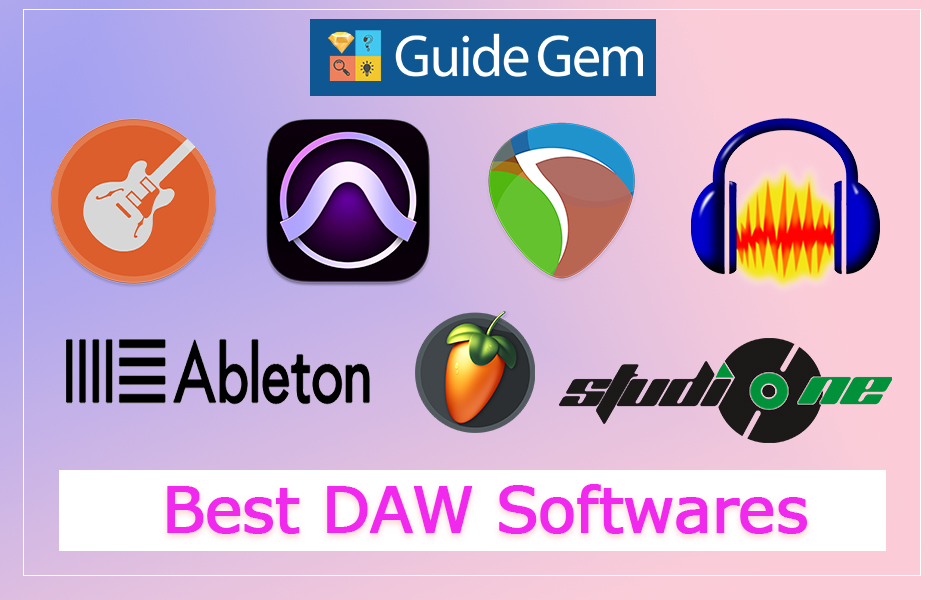 DAW is a digital audio workstation for creating, producing, composing and editing audio and music files. They allow users to mix and compose multiple tracks and audio within a system. Because Best DAW Softwares has become easier for music directors and singers to sit and work from any suitable place instead of using large studios.

Before DAW, studios were used for music and audio recording and producing. But due to advancement in technology, this trend also has changed. There are multiple choices for beginners and professionals to choose one and best DAW software for their working as there are many types of these software or apps in the market with pros and cons. So for your simplicity we have suggested a list of best DAWs among all after getting reviews from experts and their users.

Looking for best DAWs for boosting your career in the music industry? There are different software in the market for audio production. It is not easy to find the best when you have too many options, but we have tried our best to write reviews of the best software so that you might not face any difficulty.

After going through this article, you will find it easy to go with the best DAW softwares according to your needs.

Here are top 10 DAWs with complete details and explanation.

It is hard to choose the best things especially when you have plenty of choices. Same is in this case. There are many DAWs in the market with different or similar characteristics and functionality between them. But still we have listed best of all DAW software after too much research and getting reviews from each of these apps users.

Audacity is a DAW software which is free and open source. It is regarded as a very user friendly app which makes it easier for beginners to get complete grip on it.  Audacity allows users to record music, audio, recordings and voiceovers. It is also used for execution of a wide range of different projects. It is available across all OS like Windows, MacOS and Linux with more than one hundred million downloads.

Developed by Cockos, Reaper is a digital workstation and MIDI sequencer released on August 23, 2006. Version 6.21 is Reaper’s latest released version. It enables composing, mixing and processing of audio files to its users.

Talking about it’s price, Reaper is not an expensive software, instead it is easily affordable for everyone who wishes to use it.

Cubase is a powerful and advanced DAW software with the best quality of workflow. It was developed by Steinberg and the first version was released in 1989. Cubase has plenty of advanced and excellent features such as audio composing and mixing with the strongest MIDI editing capabilities. 11.0 is it’s advanced and latest released version.

GarageBand is especially created for MacOS users for creating and editing music and podcasts. It is one of few software with easy controls so that you can use it easily whether you are a beginner or a professional.

It is one of the most popular and highly preferred DAW. It is not only used for composing and editing of audio files but it also comes with video editing features. It is available in eight different languages. Developed by PreSonus, Studio One was released on 27 September 2009 and version 4.5 is it’s latest released version. It is available for both MacOS and Windows OS. It is regarded as the best creative DAW software for composing.

Adobe Audition is developed by Adobe Systems which provides creating, mixing and editing of audio files with destructive-approach waveform editing view. It is also available for both Windows and Mac operating systems. Initially it was released on 18 August 2003. Since then about 12 of it’s different versions have been released. Latest version is CC 2020 (13.0.9) which was released on 17 August 2020.

Logic Pro X is another DAW software for MacOS and IOS users. Musicians prefer using Logic Pro X because of it’s great ability of composing and producing music. It has the best stock plugins as compared to other DAW apps. It was created in the 1990s by C-Lab which was later acquired by Apple. 10.6.1 is it’s latest version Logic Pro is available in different languages. It is available on Mac App store.

Ableton Live is an Audio Workstation application and widely famous among DJs and music directors and producers. It is especially built for live performance. It can run on Both Windows and MacOS

Ableton Live was first released in 2001 and Ableton is its developer. It is used by many famous DJs around the world.

FL Studio is widely used DAW software because of its easy built in functions and plugins. It is an advanced software for music composing and editing. It was first released by Image-Line in 1997 with the latest version releasing in Feb 2021. Both Windows and MacOS can run FL Studio comfortably. Once after buying FL Studio, you will get free updates for lifetime.

Pro Tool is the most powerful and industry based DAW software ever built. It is regarded as the best software for music production, recording and  sound recording. Like other DAW apps, it is also available in different languages. It was developed by Avid Technology. Pro Tools was first released on January 20, 1989. After That it’s several versions have been released. It is also available for all OSs. Pro Tool is the most expensive DAW software, That is why it is beyond the reach of many musicians and artists.